How Small Acts of Courage Can Change the World

The following excerpt was taken from the book, Wavemakers: How Small Acts of Courage Can Change the World, from the Life Essentials Series. [Foreward below written by Chris Brady.]

The crowd was larger than usual for such an event, and it soon became evident that the venue would be packed. The amount of people who had turned out that day was indeed noteworthy, but even more so was the makeup of that crowd. For in those balcony seats sat a virtual “Who’s Who” of London high society. There were noblemen and ladies, Members of Parliament, other elected officials, and ambassadors. There were dignitaries and policy makers. And there were even a few, precious few, friends of the man who was standing alone at the metal gate in the center of the room.

The assembly was being held in Whitehall Palace in an octagonal room nicknamed the “Cockpit.” The attraction was the interrogation of a colonial representative who had shared with the public a private letter from a colonial Governor. This had caught everyone by surprise: the colonists because it confirmed for them the second-class treatment they felt they were receiving from the Crown; the members of the British government because it confirmed their suspicions that this particular representative was aligned with the rebels; the representative himself because this incident, for the first time, shed light on the true depth of the brewing conflict between crown and colony. In fact, for this particular colonial representative, it would be a wake up call that would rouse him from his slumber and forge a fire of determination that wouldn’t burn out until complete independence had been established.

The year was 1774, and on that late January day, Benjamin Franklin would be confronted with a truth he had somehow been slow to realize: that the colonies should never be reconciled to their subservient role under the British government. Up to that day, he had held to the notion that the rift could be repaired and that the colonies were better off remaining British subjects.

At first, the meeting was a minor irritant to Franklin. He had done nothing morally or legally wrong, and at most, he could be accused of behaving contrary to aristocratic etiquette. But as the vicious Solicitor General Alexander Wedderburn, known far and wide for his vitriol, took his usual rancor to new heights, Franklin grew angrier and angrier. It is said that by the end of the extended diatribe, in which Franklin was accused of all manner of treachery and treason, Franklin’s hands gripped the metal railing on the “bar” so firmly that it appeared he could rip it from the floor. Throughout, however, his countenance was stoic as a Greek statue. Finding himself in a situation utterly ridiculous, by sheer force of will, he remained silent. 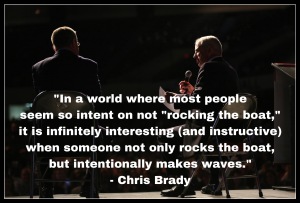 Soon thereafter, Franklin sailed back to North America from England, never to return. What had become a happy home for him, replete with fame and notoriety, friendships with the highest scientific minds of the time, membership in the distinguished Royal Society of the Arts, and stimulation for his abundantly curious mind, had now become enemy territory. He would thereafter throw himself enthusiastically into the cause of freedom for the colonies, accepting the role of Ambassador to France, where he would masterfully secure the money, guns, ships, and support of King Louis XVI that would all prove so crucial in the winning of the War of Independence.

The disturbance that began in the “Cockpit” had grown into a mighty wave that ultimately swamped an empire. And while one man didn’t do it all alone, it couldn’t have happened without what that one man alone did.

This type of occurrence, in which a single event triggers massive passion within the breast of an individual that results in a title wave of change is so enthralling, so thrilling, as to keep us talking about it hundreds of years later. In a world where most people seem intent on not “rocking the boat,” it is infinitely interesting (and instructive) when someone not only rocks the boat but intentionally makes waves. We watch those waves crash up onto the rocky shores of the status quo and wash it out to sea, leaving a world behind in the wash that is forever transformed.

We call them “Wavemakers.” They are that particular slice of humanity that cannot stand to leave things the way they found them. They seem to understand that to make a difference, they have to be different. And importantly, they realize that the opinions of those who do not care to make a difference don’t matter to them. Whereas most people seem to go through life merely trying to survive, seeking short-term gratifications and a sample of life’s pleasures, there are a select few who are utterly discontent with the status quo. These extraordinary few can’t take things as they find them and can’t leave things alone. They are driven by a desire to remake the world into something more in line with their own unique vision of how it should be. And in so doing, they create waves of change that roll through the pages of time.

These “Wavemakers” come from all walks of life, persuasions, and political affiliations. But they have one thing in common: a life dedicated to making waves. Some call them heroes; some villains. But no one can ignore them. And since they cannot be ignored, they may as well be studied. Through such study, we will not only be mightily entertained but hugely instructed. And perhaps, just maybe, we will be inspired to make waves of our own!

[To purchase the book, Wavemakers, click HERE. Posted by Kristen Seidl, on behalf of Chris Brady]

This entry was posted in Life Essentials Series and tagged chris brady. Bookmark the permalink.