Health is a gift we often take for granted until it is compromised. When sick or ill, we hark back to the healthful days with longing; yearning to feel better again and regain our former vitality. None of us is going to be healthy forever. All will experience sickness and debilitation, to different degrees, to be sure. And to be clear, there are significant, debilitating illnesses which will quite literally take a Rascal out of his game for a period, and in extreme cases, permanently. But that doesn’t mean we can’t have a good attitude in the midst of the toil and realize that for a vast majority of afflictions, we will simply have to tough it out and press through it. Truth be told, many of the great achievements throughout the ages have been done by Rascals who simply had to tough it out through sickness, pain, discomfort, or whatever. When all else fails, toughness alone can be a powerful weapon to keep one in the field.

There is an interesting concept I’ve discovered by watching champions of all kinds: winners learn to play hurt. Everyone experiences sickness and pain, heartache and hurt feelings, brokenness and despair. Pestilence, hunger, disease, sickness, and injury have plagued humanity since the fall. These facts are true for rich and poor alike. The famous, lucky, beautiful and gifted all suffer as do the obscure, unlucky, ugly and average. In fact, in light of that truth, these superficial labels start to lose their power to classify people. In the end, we are all living under the same set of human conditions where pain, suffering, and setbacks are just a way of life.

Rascals understand these rules of the game and learn to press on regardless. In a literal illustration, top level professional athletes learn to continue the season with wrapped injuries and pain-killers. Sitting in chill tubs or massage rooms after the games, they work through the pain to ready their bodies to perform again. Most sports are played by athletes with injuries and damaged bodies. 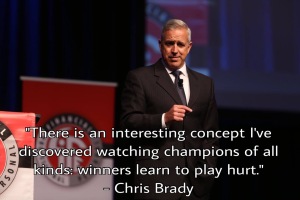 I will never forget a particular National Football League game in Texas years ago. The Dallas Cowboys were aiming to make it to Super Bowl XXVIII and playing a late season game at home against the New York Giants. Home field advantage for the playoffs was on the line and the Giants were giving the Cowboys a rough time of it. It looked bleak for the Cowboys when in the second quarter, star running back Emmitt Smith went down hard on the frozen surface and separated his left shoulder. The pain was evident in his face. Smith went off the field drooping his shoulder and wincing. Surprisingly, though, Smith came back into the game. He ran the ball again and got tackled hard. Slow to get up, Smith made his way back to the huddle for another play. Smith ran the ball or caught passes again, and again, and again. Each time it appeared it was all he could do just to get back up. Somehow, though, Emmitt Smith managed to carry the ball just one more time. Said Smith years afterward, “I’m in the huddle saying to myself, ‘No pain, no pain,’ I’m just talking to myself, ‘no pain,’ and tears are rolling out of my eyes, I’m trying to convince myself there’s no pain, but I was feeling all the pain!” Teammate Michael Irving said of Smith’s resilient play that day, “He stood up and played, I mean he just played and played and played. I’ve never seen a performance like that!” The statistics say it all. That afternoon, Emmitt Smith had the ball for 42 of the Cowboys’ 70 offensive plays, with 32 runs for 170 yards and 10 catches for 62 more. The Cowboys defeated the New York Giants that day, securing home field advantage for a playoff run that would indeed see them win the Super Bowl.

The converse of this type of performance might be called “loser’s limp.” We’ve probably all seen it before: a defensive football player gets beat on a play, gives chase to the offensive player carrying the ball toward the end-zone, then upon seeing that the chase is futile, pulls up with a feigned injury as an excuse.

In life, people can choose to either play hurt or adopt a loser’s limp. A loser’s limp involves finding some excuse, any excuse, to explain away the lack of success. It’s as if these people are searching for an explanation good enough to get them off the hook. And in fact, when it comes to choosing not to succeed, any excuse will do. It is one thing to make excuses for lack of performance to others, and that is bad enough. But the saddest excuse is the one a person sells to himself. Unfortunately, many will work very hard to convince others of the excuse they have chosen to adopt for themselves. The only problem is that any excuse they have for not accomplishing something has already been used by somebody else as the very reason for accomplishing it! The difference is whether or not someone is willing to play hurt!

(Posted by Kristen Seidl, on behalf of Chris Brady)

This entry was posted in Leadership and Success, Rascal Book and tagged chris brady, Rascal. Bookmark the permalink.

One response to “Winners Play Hurt”